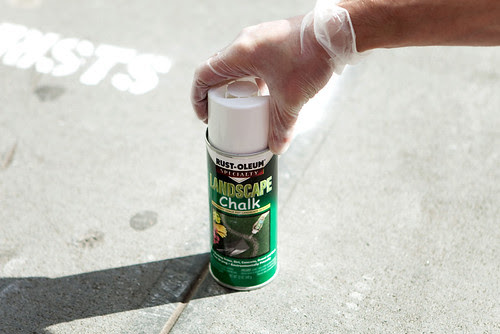 For our latest Improv Everywhere mission, our friend Jeff had a funny idea to create separate lanes on the sidewalk with chalk for tourists and New Yorkers. 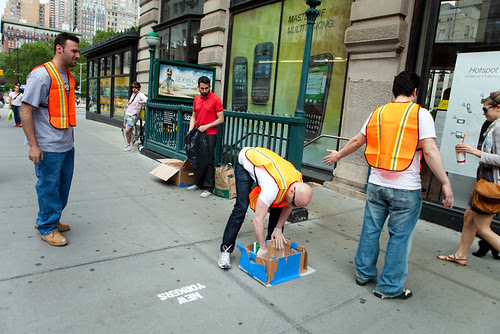 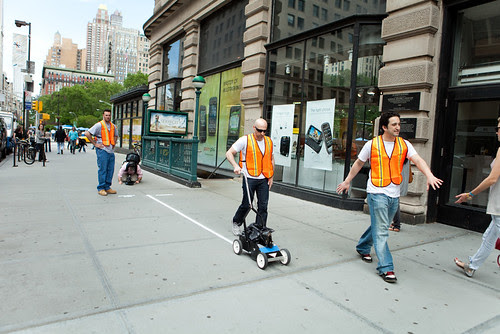 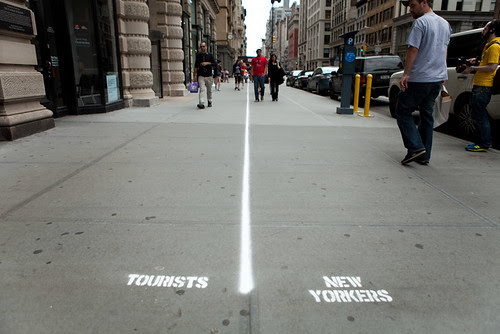 New Yorkers are known for always racing to their destination and since people from out of town like to take their time and actually enjoy the city, having separate lanes isn't a bad idea! 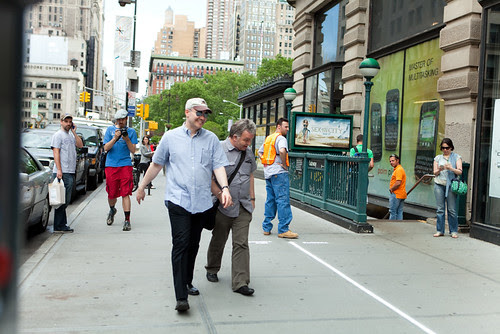 Everyone thought it was hilarious and suggested that it be painted in all cities. 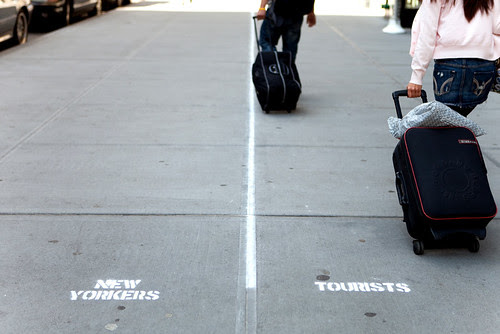 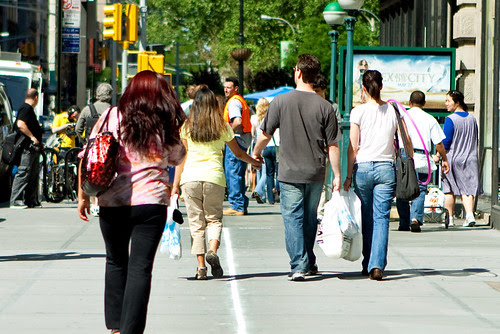 I'm guessing this couple has a long distance relationship. 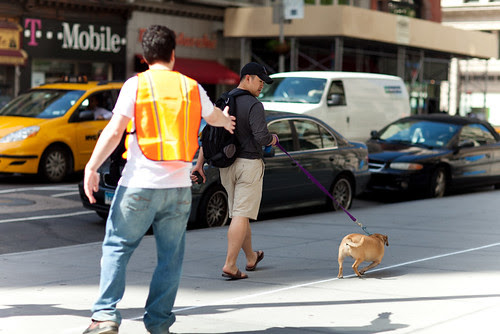 Our friends wore orange vests and pretended to be in charge of keeping people and dogs in their lanes. 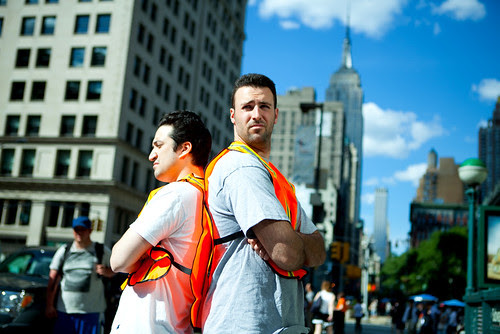 They were improvising the whole time and were talking like very stereotypical New Yorkers. Their interactions with people are absolutely hilarious. I've been quoting some of their lines all week!
Even though I live in New York, I'd prefer to take my time and stroll in the tourist lane ;)
Posted by colormekatie at 12:41 PM

That idea is soooooo good!
There are so many things you can do with sidewalks.

Brilliant! Would have loved to be a part of it!

I think I saw you snapping photos at some point in the video, Miss Katie! You're a star!!!! :)

I always love seeing the latest improv everywhere initiatives! you guys are awesome. i can't wait to visit new york city, and of course i'll stay in the tourist lane!

This is a brilliant idea! My boyfriend and I were walking around NYC last weekend -- he wanted to know how to spot the tourists. I told him that they're the ones walking MUCH slower than the rest.

I've been reading your blog for some time and just adore it. It's in my "Make Me Smile" reader folder.

Ahhhhh I love it! Hilariously brilliant!

Hahaha I love it! This is so funny.

I love when he says to the tourist guy, "it's ok, i didn't bring my gun today" the look on the guy's face was priceless! what a fun idea!

now that is awesome. i love new york and when i visit i am a total tourist. i would appreciate a lane where I don't feel i am getting in others way. hahaha

haha, that's a great idea! can you do that in boston too? :)

This was an awesome idea. My favourite remains the invisible dogs and the look on some of the real dogs to see leases with no dog attached at the other end. But this comes a close second.

this was such a cool idea- i loved seeing the way people reacted, haha!

This is awesome! I'd heard about it on the news!

this is so funny I love it what a fun Idea!

I saw this somewhere else, but didn't realize Improv Anywhere was behind it! Hilarious! And beautiful photos as always.

Oh my gawsh.. we NEED one of these in my town during the summer.

Victoria BC is "plagued" with slow walking tourists when the rest of us are trying to get from A to B.

What a hilarious idea! You New Yorkers are hilarious. :]

There is nothing like REALLY being in a rush & getting stuck behind a family of 5 wanting to take a family photo in the middle of the sidewalk, or people with their faces stuffed into their maps trying to figure out where the cheap "designer" bags are on Canal Street! :) I think this idea is brilliant! Someone call Bloomberg.

@ Kathryn- Bloomberg actually commented on it and said it was cute, ha!

Come do this in London ... please?

I live in the Midwest, but I walk so fast that I'd love having that New Yorker lane.

That is SO FUNNY.

great idea, and I love your blog by the way. Not sure how you do it but the colours are so amazingly vibrant! good stuff!

Love this idea. Big help if you want to pretend to be a real New Yorker :D

I had fun watching the video,Katie!

Too much fun!!! While I live in a small town, it swells in size every summer and great weather spring & fall weekend, so I can definitely groove on the tourist v. local vibe! :>

That is too funny. Love the expressions on their faces. I'd be embarrassed to walk in that lane, but that's where I'd be...camera in hand;)

Too funny. I love the part where he says he doesn't have a gun today. I love NY humor.

I saw this on the news. Some New Yorkers were going on about how they should have this all the time because tourists are so slow - which kind of annoyed me because I find that a lot of people from NYC are too busy texting on chatting to ever move efficiently.

What a fun idea!

I love it! These videos always put a smile on my face. Thank you!

Color Me Katie, you always inspire me to look for the sunshine and brightness in everyday life, and I love seeing a brand new post from you! :) Thank you!

I heard about this on the news all the way across the country here in Utah. It made me smile then and makes me smile now. :)

I heart your blog, and have been visiting for months now. I just love all the sparkly bits and pieces of colorful joy. Thanks!

I linked to this story on my blog because this is something my husband and I always complained about on our college campus...I guess it happens everywhere, no?

your blog always makes me smile :)
maybe because I am a Katie too!

Oh, I wish this could be done all over in NYC. We need this.

All of your stuff is so colourful and happy.

and, of course, i think i am falling in love with moo. :P

I LOVE THIS! Bravo :) you should do it all over NYC. hehe

so it was you! i read about somebody coming across this recently in nyc and in the 3yrs i lived there was racking my brain if i'd ever seen it anywhere!!!
fantastic!

This is so awesome! I love the idea :)

Love how they did the stencils using boxes. Is that standard? I've never seen it done before and like how it contains the overspray.

Hi Katie,
I love your work.
I was just wondering what you thought of banksy as i love his work. your like the street artist that represents the good in everything and him the bad.

such a fun idea! how adorable!

The idea is amazing, I love your blog!

This idea is amazing and hilarious! There should be a team around the Disney area in Orlando!

Also, mind me asking what camera you're using? Thanks. :)

"but you are statistically slow"

this is just golden :)

hehe! what a chalk line can do

Theres a giveaway going on at my blog mylovelylittlesuitcase.blogspot.com come check it out!

That's so fun! I knew a couple guys who took their mountain climbing gear to Chicago and 'climbed' the sidewalks of Chicago as if they were vertical. It was a riot! :-)

Brilliant!! i live IE that idea are greit!!! see you Katie!!!

This is a fab idea, it should be done in London too! So many tourists!
I just discovered your blog and have read every single post from start to finish. You are such an inspiration and you made my day (and got me out of my bad mood!). Seriously, your blog is so colourful and happy and I can't wait to follow along xxxx

aww i saw this on the news and they had no idea who had done it! its brilliant.

that was you?! i watched the youtube of it a few days ago!

That is awesome!! We need something like that on our roads down here in SC! I saw your love story over at Gwen in Love & wanted to tell you how adorable it was!

I have been searching for that landscape chalk ALL OVER town! I don't think it exists in Alaska. I wish I could find a way to make my own liquid chalk-- I've searched and searched for a way online but to no avail. I won't give up the search!

This is so great!

I wanna go visit NYC again. The only crowded place I love in this world.

great idea :D i want to have lanes like this as well :)
and i love those stencil techniques. my dad and me are "collecting" them, e.g. taking pictures whenever we see them.