One of my favorite Improv Everywhere missions that I've shot is "Human Mirror". We filled a subway car with 18 pairs of identical twins and half of them sat on one side of the subway car and the other half sat on the opposite side creating a human mirror. 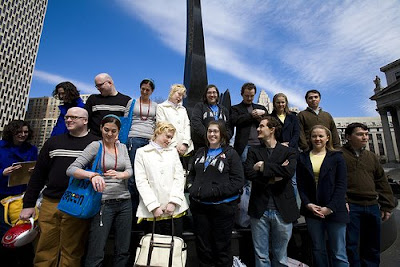 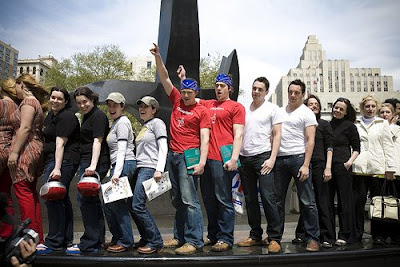 All the twins met us at a park wearing the same exact outfits. I've only seen 1 pair of identical twins in my life so being around 16 pairs made my head explode, I couldn't stop laughing! 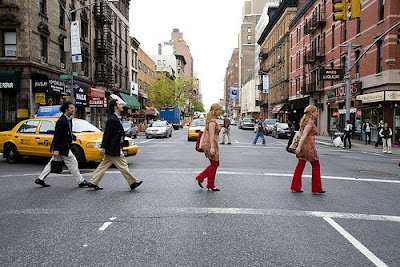 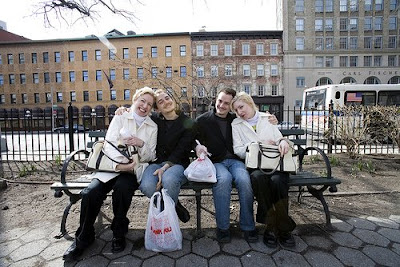 They shared some awesome stories about times they switched places as kids. It made me think of how badly I wished I had a twin when I was little. I used to wish that I had one but we were separated at birth and maybe we would bump into each other one day! 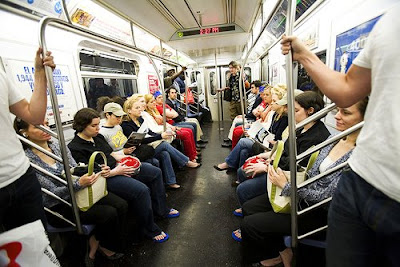 The Human Mirror!
Posted by colormekatie at 8:15 PM

I ALWAYS wanted a twin when I was little, I still kinda do. I would actually get mad at my parents for not having one. this is a great improv anywhere shot, thanks for sharing.

I guess everyone at some point of life wants a twin as well! It must be hilarious having a stranger on board the train seeing everyone else look exactly like the ones across them.

I love this as I am a twin myself!
PS your blog is great, i've added it to my blog list and I see we also shared the same post about the pants free subway day!!

I love how you share your life thru photos... I want to do this SAME thing! Please let me know how to post pictures! I am new to this but I want to be FUN like you! You make my day when I come and look at your blogs! Help me PLEASEEEE! Thanks!

What a cool concept! I'd love to see some of the reactions you got.

How completely cool is this? I love it!

Wow, what a super neat idea. That must've been awesome. Seeing twins as adults freaks me out because usually they are living in separate places so you only meet one of the siblings...and then down the road the sibling comes to visit but you've never met them and so to see your friend and his/her twin is just rather...odd.

haha i always wanted a twin until i became best friends with a set of twins who did not get along with each other at all. now that they live on opposite sides of the country, all is well between them. mostly. they did make me appreciate being one of a kind though.

That is such a great idea! And it looks awesome! Well done - great blog!